The Tale Of A Delicate Woodland Dandy 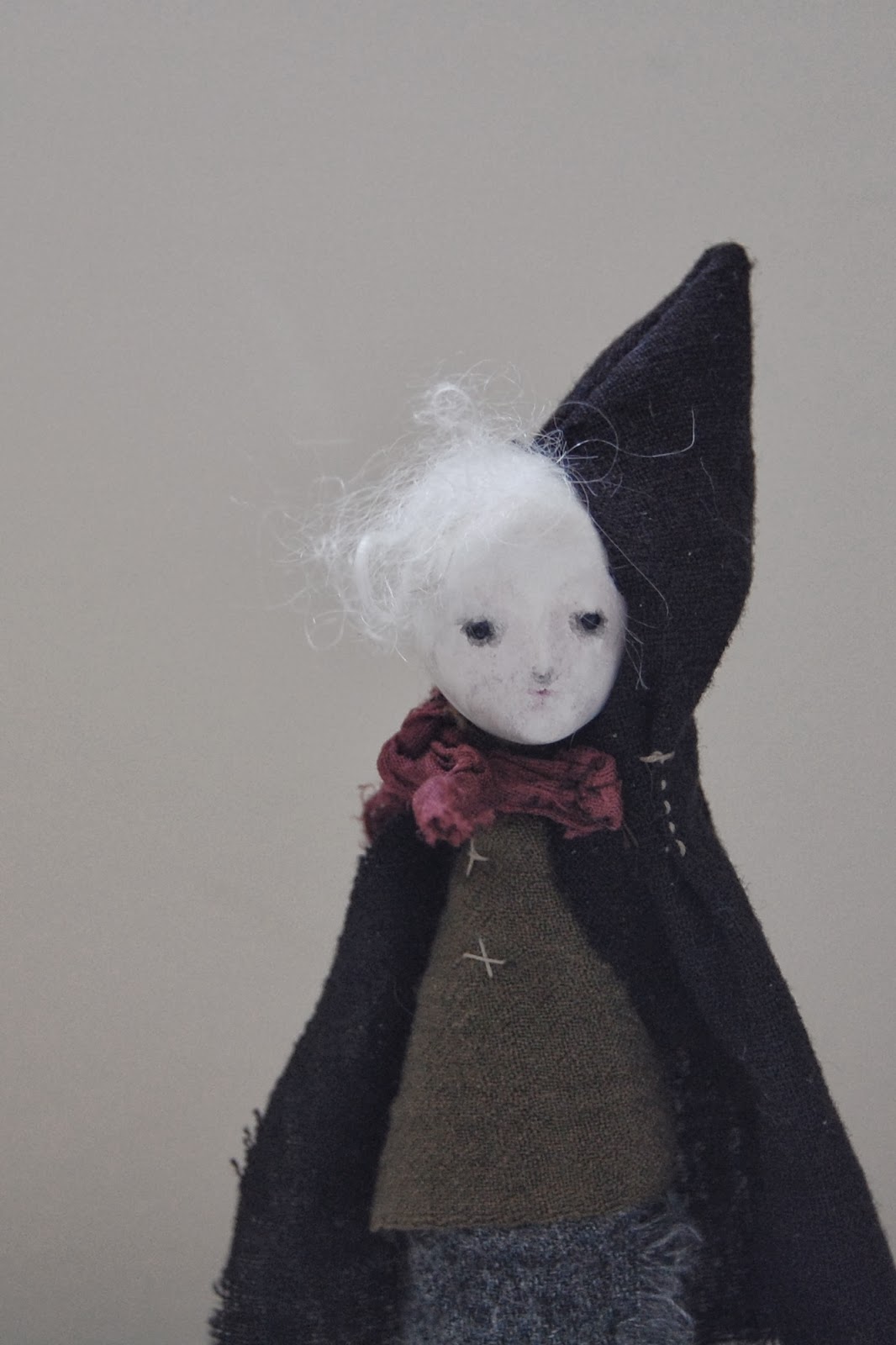 Culain was a silent and graceful child, as fair and willowy as, well, a Willow. His quiet elegance left him somewhat of an outcast amongst his rough and tumble peers, though Culain seemed not to mind, for he loved his lonely walks though wood and dale. The tinkling of the brook and the rustling of mice scampering through barley was all the conversation he ever needed.
He prepared his wandering garb the night before, it was smoothed, brushed down and laid out neatly on the chair at the foot of his bed and his knee socks were thoroughly checked for holes and ladders, long before he put on his beautifully polished boots. For when one is going to meet Ones as ancient as the hills and the rocks, then one really must look ones best, don't you think?
In the kitchen he would wrap his sandwiches in crisp, brown, waxed paper and tie them up with a flourish of string and a flick of the wrist. A smile usually tweaked the corners of his serious mouth when he thought of the fresh and fragrant greens, that lined the streams and pathways and would soon be accompanying the delights contained in that little, waxed packet. 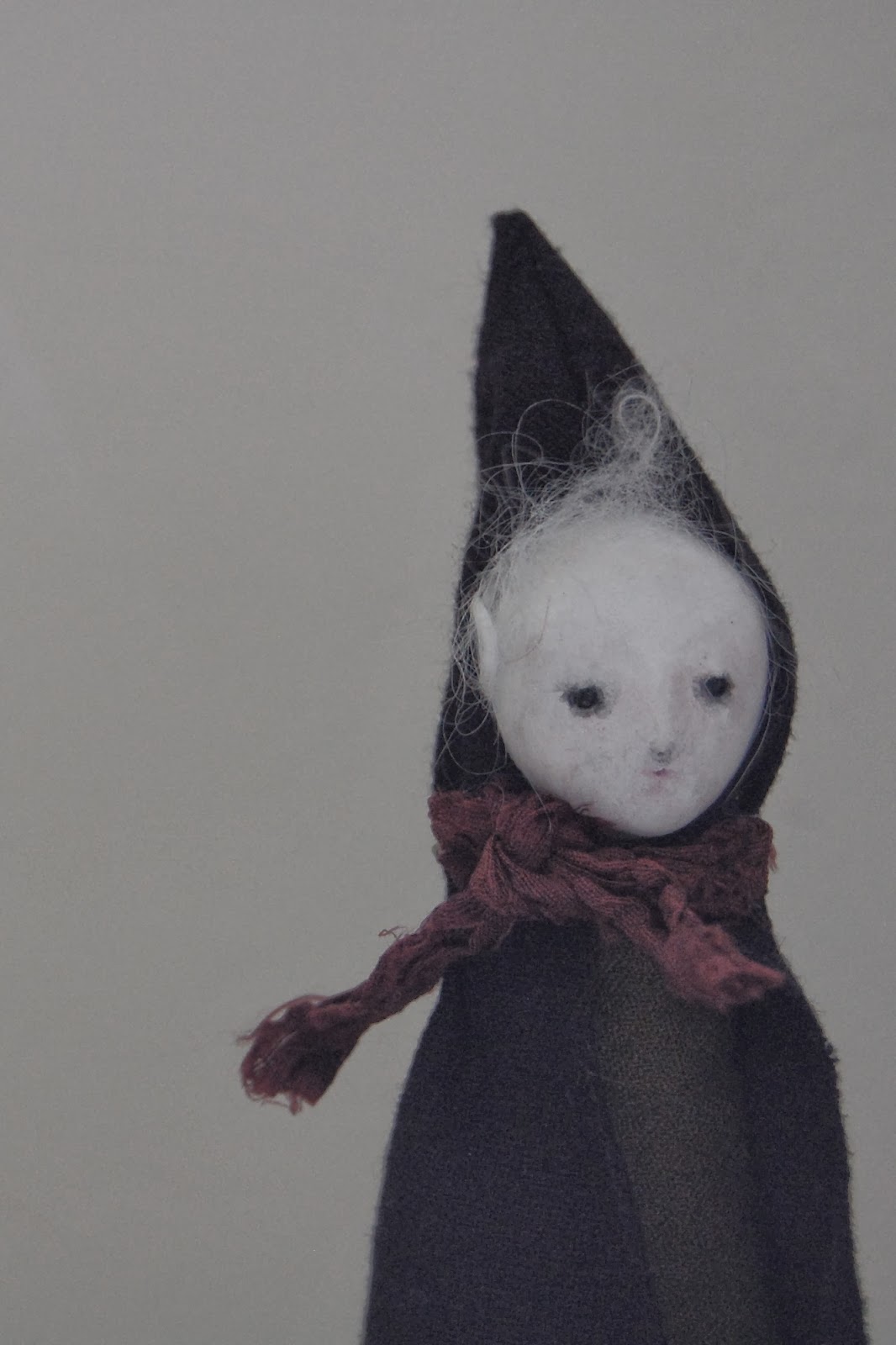 One last glance around, lest he forget something of great importance such as a handkerchief to clean his mouth on, or a pickle fork to pull the berries off their stems, satisfied that he was correctly organised he would pull the door shut and stride off down the lane.
It was a fine, bright morning late in the spring, voles darted through tunnels in the hedgerows and Culain sighed at the as yet empty vines of the thorny blackberry, he knew that in a few short months, they'd be ready for picking and he could barely wait. Our dandy wanderer walked on briskly, eager to reach his favourite stream by lunchtime, where he could sit with his feet in the cool water and eat his sandwiches. 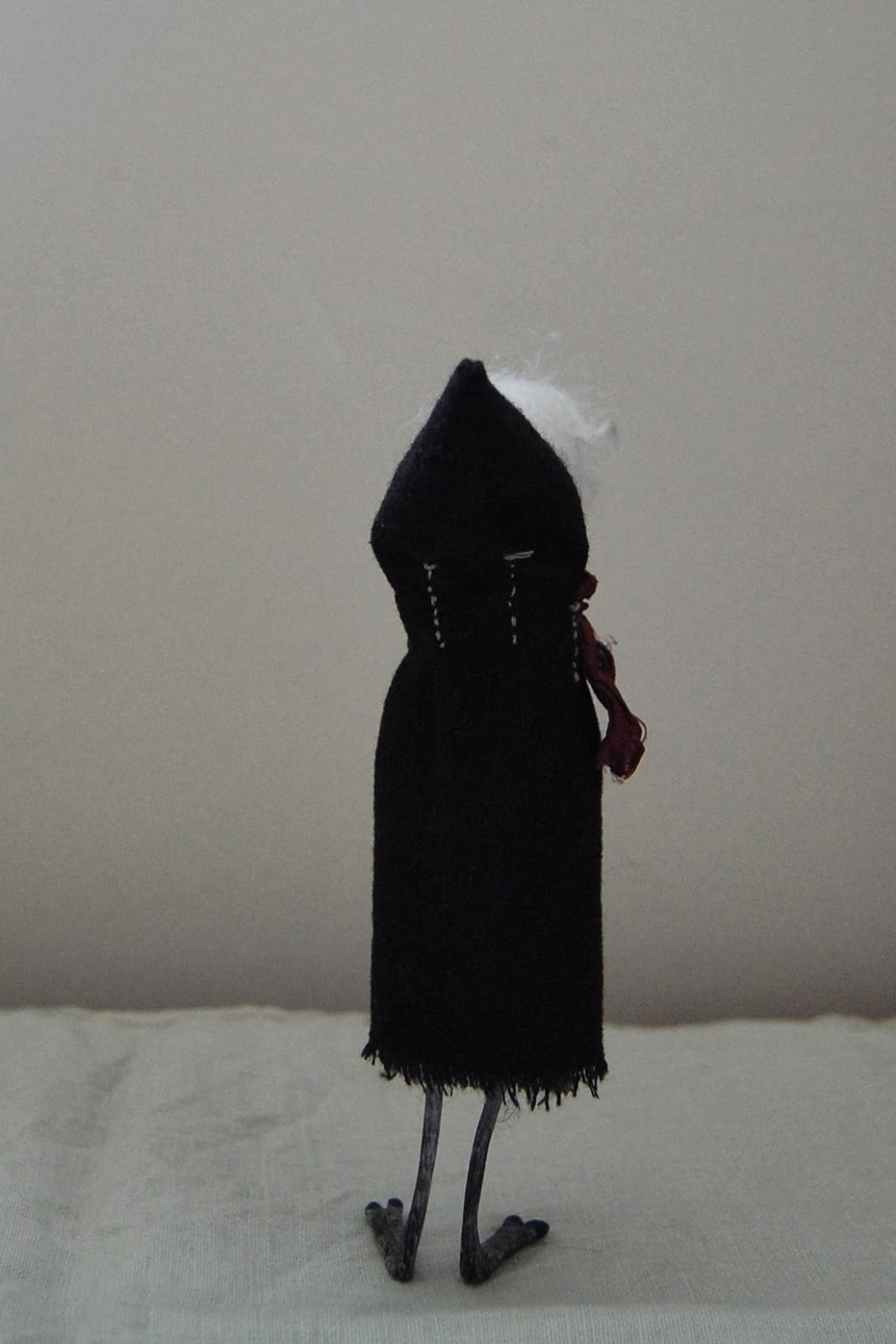 The banks of streams are wonderful places to forage for greens and Culain was overjoyed to see a large clump of parsley swaying by the water's edge and picked a handful of it's feathery fronds and a little wild garlic to add to his lunch. He spread his handkerchief over his knees and tucked into the newly greened sandwiches, the parsley had a bit of a bite to it, but wild foods are not expected to be tame on the tongue. Even the wild strawberries he'd be dining on for dessert would no doubt bring a tingle to his cheeks too, mused Culain.
Brushing crumbs off his lap, for the handkerchief had not caught them all, the drowsy boy lay down for a nap. It was not long after, or so it seemed, that Culain was rudely awakened by an icy finger. You see, the Governessa had found our delicate dandy, in the quietest of "sleeps" for sandwiches mistakenly stuffed with Hemlock have a habit of taking one unawares, as was the case with our dear Culain... 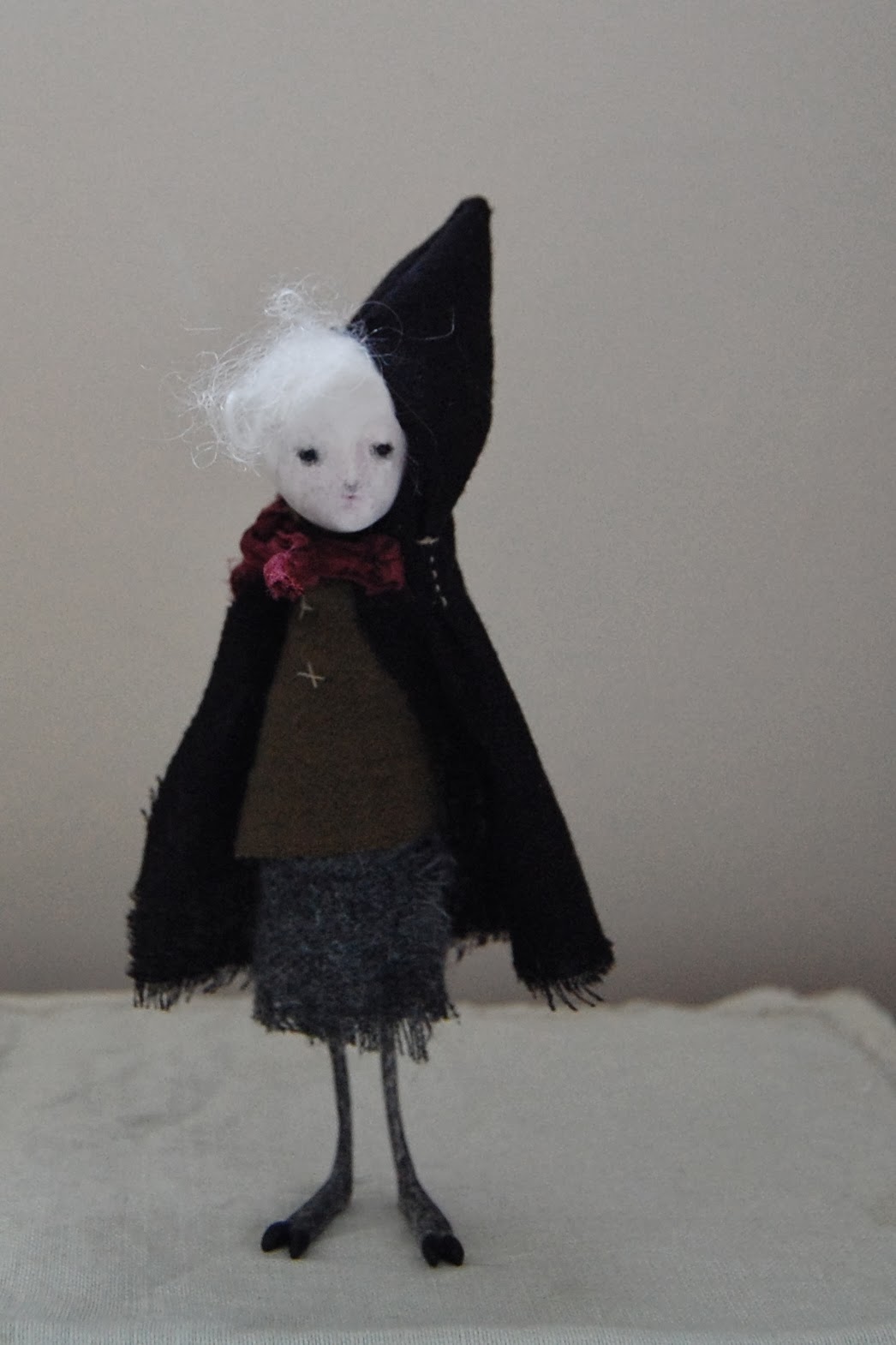 Culain looked her straight in the eyes, chin held aloft and with a defiant stare, refused to go. It wasn't meant to be this way, he'd only eaten a sandwich after all! And so, the Governessa left him there, yes, right where she found him, left for the wind to whip and for the moss to creep over his bones.
But, if you think that this, is the end of the story, then I am afraid that you do not really know the Governessa at all! For in actual fact, she fixed him with the harshest of glares and seemed at once as tall as a mountain and as terrifying as the foulest of seas. "I do hate it when I have to drag them kicking and screaming" thought she, as she tightened her bony grip around his wrist... 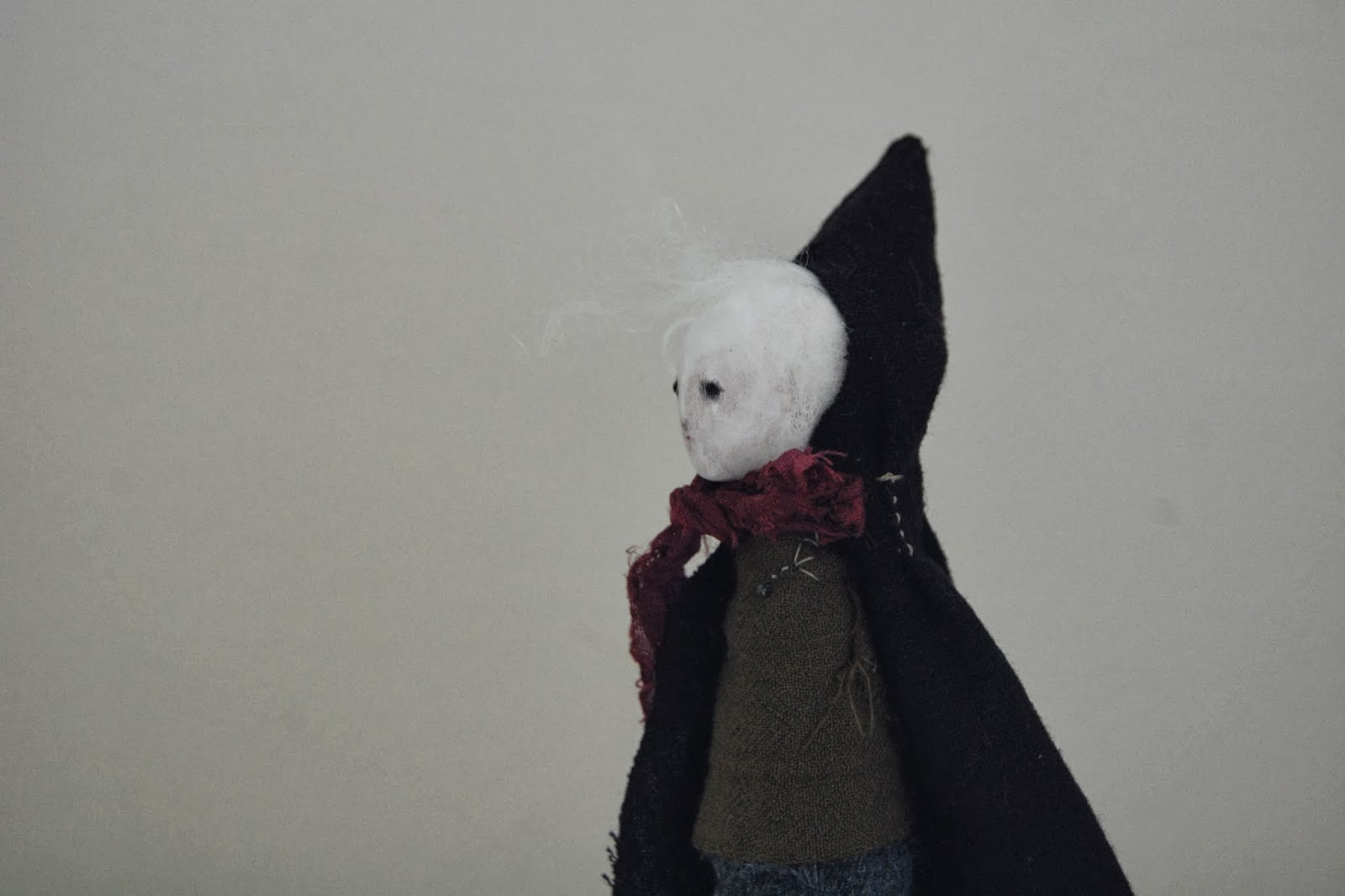 1. Where do you keep finding all these original ideas?

2. Does anybody govern the Governessa?

Ah, the meanderings of a twisted mind I think. Enid Blyton broke me a long time ago.
As for the Governessa, I haven't been made privy to that information, yet...