Aah, rainy Mondays- snails, soggy dogs and a magical gloom that fills the air. A perfect setting to enjoy the wondrous worlds of Lewis Carroll and Tim Burton, I can't wait to see this!


Here's a link to the online book illustrated by the magnificent Arthur Rackham. 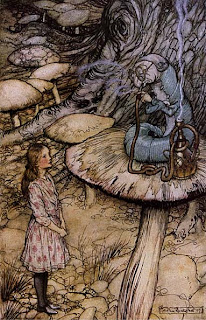 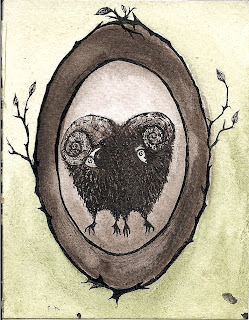 The Wee Folk are coming to me thick and fast these days and I'm trying to capture them before they disappear down the dusty corridors, never to be seen again.
Here are Olive (on the left) and Edgar a pair of hirsute twinlets, poor old Edgar usually has to traipse along wherever Olive wants to go, except for when it comes to gazing at the patterns of the sky in murky puddles, where he firmly stands his ground.
They can often be seen sucking on moss, and admiring the silvery patterns created by snails and slugs. Shooting stars of the dirt is what Edgar calls them.
Olive's best friend (except for Edgar) is Stinking Russula (more of her later).
Posted by Anthropomorphica at 12:21 1 comment: