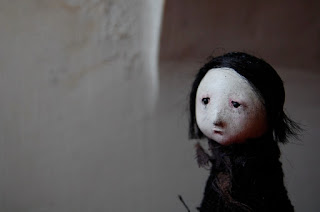 As a babe in arms, his voracious appetite sucked his mother dry 'til she was desiccated, bloodied and exhausted. As Hungry Tom grew, his hunger did too, sadly, he scoffed all she had on her meager pie stall one too many times.
Something had to be done she decided, before they all end up destitute with not even a mouldy pie crust to their name. Heartbroken yet resolute, Molly turned him out to forage the dirty streets of old London town. 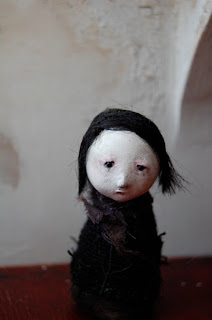 Blessed with his mother's resourcefulness and culinary talents, he quickly put the available produce to good use, fat, juicy, black slugs pickled in the gin syphoned from Maisie's bottle, when half-cut she took a snooze against a gas lamp.  A delicacy amongst the inebriates of Pig Swill lane, I'll have you know!
On a more fortunate day, he might chance upon a wormy apple, a leftover, fallen from Grocer Hardacre's cart, catch a delicious wiff of roasting chestnuts on a draft of stale city air, then slip into a slumber filled with blazing hearth fires, caramelised chestnuts and buttered turnip.
Poor soul, he always woke up hungry! 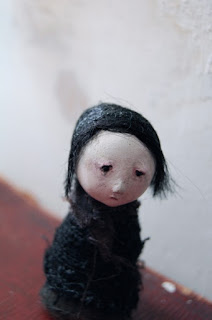 This time of year's particularly hard on the lad, what with this new  Christmastime celebration being all the rage, gaily coloured gifts under the tree and a big fat goose in the ovens of them that can afford it. His pickled slugs and wormy apples seem not so delicious now, leaving Hungry Tom with the bitter taste of pavement dirt in his mouth. Sobbing as the gin takes hold, he trudges through the grimy streets. 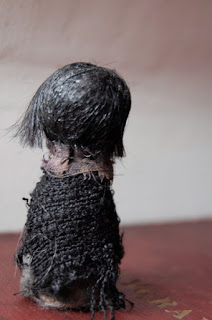 What a welcome antidote to Tiny Tim.

I thought you might appreciate the less neatly tied up ending JJ.

These dolls are gorgeous. i found your creations on Etsy, they're simply amazing.
Have a great new year!