After my meeting with Weesk, I became ever curious as to who is The Woo. Of course, I didn't quite know where to begin. So, I enlisted the help of  Myrtle Clumpett as I remembered that she was also of the Watcher clan, albeit disgraced (but that's another story!)
With my beloved Myrtle's help it didn't take long to locate their burrow. 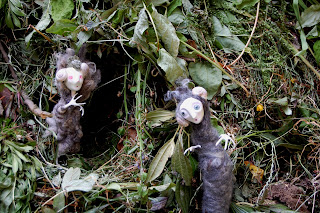 The Woo, or Prudence The Prude, (as Myrtle calls her) was none too pleased at the sight of Myrtle and I. Poor Weesk was plainly horrified, lest I let slip that we had already met! 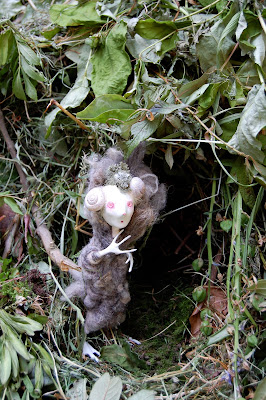 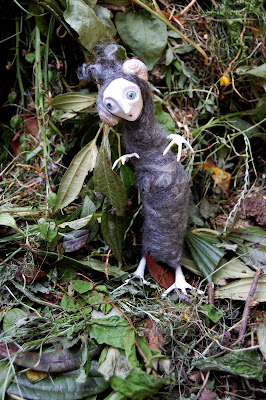 Knowing that Weesk likes to wag his chin far more than is proper, The Woo sent him out to collect supplies for their storehouse and some new moss for her carpet. 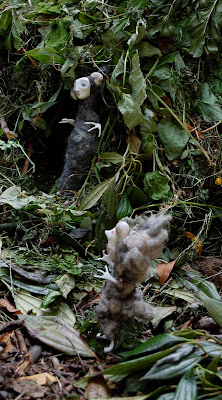 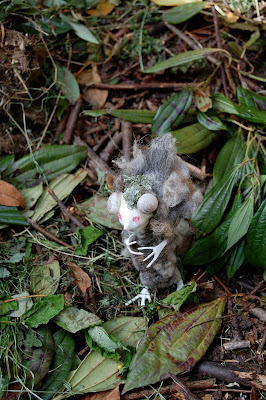 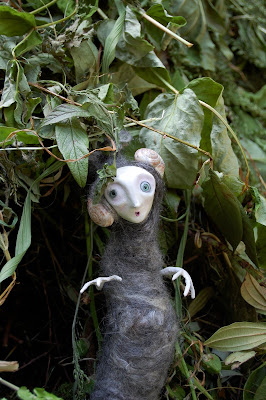 " Mind you don't dilly dally and keep your eyes open" 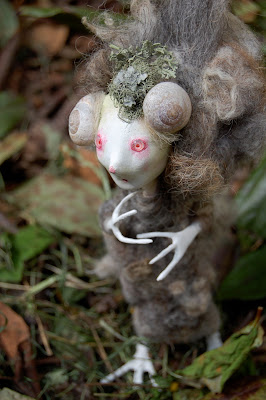 "I do hope they won't tell I was captured" worried Weesk. 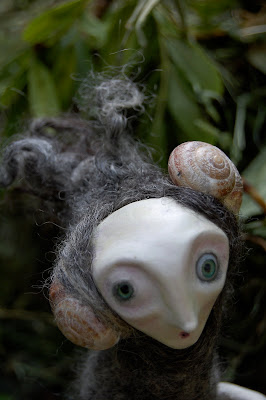 "Oh dear, I do hope he doesn't bring lichen" muttered The Woo. 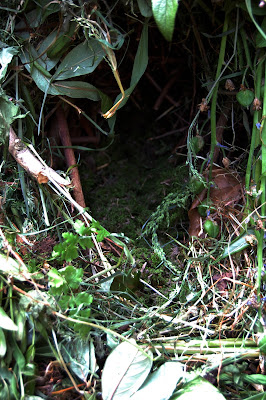 The Woo is fastidious about the upkeep of her mossy carpet and only the softest and greenest will do.
Posted by Anthropomorphica at 10:01

Such an enchanting story to read first thing in the morning. Beautiful photos and so nice to finally meet The Woo. I'm loving all of your little creatures and their stories!!! Oh! but how I do worry for Weesk...

Melanie Melanie Melanie my good woman ... I am in awe of you. When you publish your first book I will be in line for an autographed copy. Your stories, the amazing creatures you create ... everything ... are so FANTASTIC. BRAVA BRAVO AND WOW!!!!!!!

I'm thinking about this one, Mel, and deciding whether to tell you what a wonder you are, or to engage with the Grand Duchess and her downtroden lackey.

Thank you Evelyn!!! I'm looking forward to visiting your tea party, I'll have to kidnap Weesk so he can have some fun ;)

Shayna! Oh my goodness, I feel lost for words that you so appreciate the workings of my unhinged mind ;) But, let me say that you have to take some credit here, reading your poems and stories made me want to weave my own!

Hi Jeff, I love that! Seeing her as the Grand Duchess adds a whole new dimension to her character ;)

Oh Melanie, Melanie, maker of Woo
My praise is sincere, but I think this is true
However you dress her in red, white or blue
She’s got her man pegged.
I suspect she is YOU.

Third scotch. You kept me up. Well done. And me with a toothache, too.

Oh, you horror!!!
You're keeping giggling this evening Jeff, I can't get over the knitting needle and woolly hat.
Ah scotch and toothache, perfect friends! I remember quite looking forward to toothache as a kid, being given a teeny bit of whiskey to dab on the offending area.

Melanie! How I adore your "unhinged mind"! Thank you so much for the most dear things you told me.

~such enchanting little ones you create...gertrude below is beautiful in ebery way...delighted to have stumbled upon your place...warm wishes and brightest blessings~

Faerwillow, thank you for your visit and kind comments.

More , please :) I so see this work in book form especially with your stories. The images outside bring back all of those fairy tales images of creatures of the woodland. I've been reading Bluecrest, Thumbelina,etc. to my son lately and he's been intrigued by them. I'll have to show him these pictures and let him know they also live there too:)